We have some patchy Internet now which is the first we have had in over a week in Ethiopia, it was 46 degrees at the Metema border crossing and we have since been camping at Tim & Kim’s Village in Gorgora, Lake Tana. Tim and Kim are a Dutch couple that run a foundation and a non-profit campsite for overlanders and travellers alike in order to support the local community. It was a gorgeous location on the lake and we really enjoyed Kim’s amazing food and Tim’s cold beer for three days! If you would like to support an African initiative then these guys are very worthy, hard working individuals who are here entirely of their own desire and commitment… http://www.timkimvillage.com/

We have also just had two nights in the Simien Mountains testing our bodies with the altitude and trying some of our Kilimanjaro gear before the time comes. We ate our dinner with the Gelada Baboons and had some interesting hand signals going on with our obligatory scout (sent into the mountains with all tourists)… A little whippet of a man with a huge gun but very sweet and he took good care of us the whole time.

Also, now that we are out of Sudan we can fill in a few of the gaps for those that are keeping watch:

After reaching Istanbul, we decided against travel through Syria. We spent two days on the internet and phones trying to find a company that would ship the car and/or us to Egypt or lastly Israel. A shipping agent called Rosenfeld, based in Haifa, finally had an option for us and we had four days to get to Lavrio at the bottom of Greece to board the ship. Three nights in a drivers cabin and some very interesting people later we arrived in Haifa (only to spend 11 hours trying to get out of the port!)

We spent the first night at Lake Tiberius and then headed all the way south to Eilat via a few sights, Jerusalem and Bethlehem. It was hard going as we had no working navigation or maps but I never thought I’d visit Israel so a bit of a bonus. It’s a beautiful country and the people there are really friendly, maybe somewhere to visit with an organised tour group.

We crossed the border into Aqaba, Jordan using our NZ passports and managed to avoid all stamps until one official accidentally stamped Richards passport with a vehicle related stamp so all shipping documents, ANY potentially dangerous paperwork and NZ passports got FedEx’d back to London once we had some free time in Assuit, Egypt.

Before entering Sudan we removed a few things from the website in order to cover our tracks through Israel but these are now back up and running.

More pics and things to come as well x 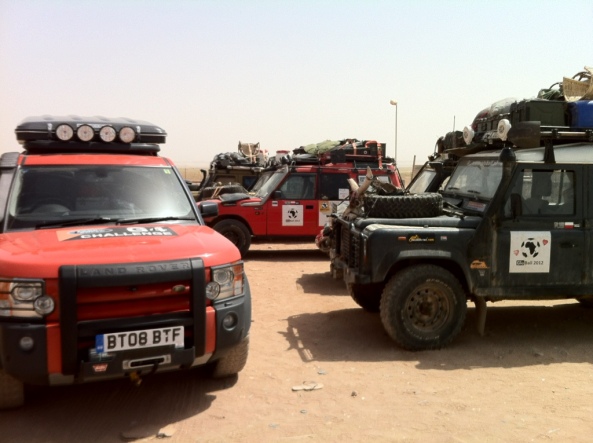 We are in Khartoum today, it is baking hot as you can see from the pic I took in the car yesterday.

We bumped into another over landing Kiwi yesterday who gave us tons of great advice so thanks to Darren in his Defender! Darren has been travelling for two and a half years now so he is a pro… and very committed!

We also met a French couple in Wadi Halfa who have travelled in their Defender for 18 months now… Canada, US, South America and then Jo’burg to France. They were also lovely to chat to and had some great recommendations for the countries we are yet to visit. Did I mention they also had FIVE CHILDREN. Five! So all 7 have lived in their Defender for 18 months, how inspirational is that!

We have spent the last 5 days travelling with two Italian bikers, Roberto and Andreas, really great guys full of the textbook Italian passion! They have headed for the border today so good luck to them both and maybe we will catch them again in Ethiopia.

Anyway, we are now a bit grounded in Khartoum as we have an empty fuel tank, no more cash and Visa cards do not work anywhere in the country. Brilliant! Hopefully HSBC and Western Union can help us out swiftly 😦